Evaluating and Analyzing the Health Indices in Rurals of Nomadic Settlement: (Case Study: Nomadic Rurals of Fars and Isfahan Provinces)

1. INTRODUCTION
Health is a concept whose fundamental attention is on keeping capitals (human, natural, social, and economic) for inter-generational justice. Paying attention to the health dimensions (ecologic, social, and economic) of Rurals is one of the fundamental basis of sustainable development. Health in rural and nomadic regions is a complicated phenomenon and is the pre-requisite of rural sustainable development, and its realization requires a healthy environment and appropriate social, economic, cultural, and environmental grounds. Identifying the nature and dimensions of health, and factors affecting it on the one hand, and doing measures for enhancing it in rural regions on the other hand, have significant necessity and can have important roles in the sustainability in these regions. Now, after three decades of the experience of nomad settlement, the present study is to answer this general question that “how is the state of rurals of nomad settlement in terms of enjoying health indicators in four healthcare, sociocultural, economic, and environmental-physical dimensions?” The present study is an effort to present and evaluat health levels in nomadic rurals.
2. THEORETICAL FRAMEWORK
Health planning is a relatively new term which has nowadays been coined by regional planners who have always have intended to link the environment with physical and psychological health. In the oast, planners and authorities of healthcare were not in coordination regarding making their decisions about some basic issues such as ’social welfare, improvement of human life, and health.. Consequently, the unfavorable expansion of physical spaces, destruction of natural habitat and biodiversity, reliance on automobiles in urban transportation, paying more attention to internal regions of cities, the reduction in urban public spaces, and also the expansion of marginalization of lower-income social layers. The objectives of the millennium development indicate that, there is a relationship between health and social conditions. According to the framework of the objectives of the millennium development, without significant reduction in the level of poverty, creating food security, education, giving rights and authorities to women and improvement in life conditions in poor regions and ghettos, gaining access to healthcare objectives will be impossible in so many countries.
3. METHODOLOGY
The method employed in the present study is an applied one in terms of objectives, and a descriptive-analytical one in terms of method. In the present study, to collect data, documentary study, questionnaires, and observational methods were used. To analyze the data and prepare tables and information maps of the studied scope, SPSS and Arc GIS software programs were used. The statistical techniques including one sample t-test and multivariate regression were used. In addition, to rank nomadic Rurals, TOPSIS models were employed. The population of the present study was 4496 individuals residing in five regions of nomad settlement in Isfahan and Fars Provinces. According to Cochrane’s formula, the sample size was evaluated to include 384 participants. Selecting participants among Rurals was random and the mode of distributing questionnaires was proportionate to the population of each village.
4. CONCLUSION
In the present study, health levels in nomadic Rurals and households residing in villages were investigated and according to the general sense of health, it was measured in four health, sociocultural, economic, and environmental-physical dimensions. Regarding the findings of the study, regions of nomad settlement are not favorable in terms of health indictors in such a way that economic criterion with the mean scores of 2.56, environmental-physical criterion with 2.75, and health criterion with 2.91 have moderate to low health levels and they are in unfavorable states. Finally, sociocultural criteria with the mean scores of 3.48 have moderate to high health levels and they enjoy relatively favorable levels. In general, sociocultural criteria are more favorable than other criteria and are in moderate to high levels, while other criteria have lower levels and sometimes relatively unfavorable levels. The poorest state is for economic criteria.
Regarding that the strategy of sustainable development in recent decades have had the highest effects on planners’ attitudes, villages of nomad settlement in the studied regions have not been able to provide the sustainability in the life of households residing in the regions in terms of health levels because with the comprehensive approaches and the strategies? of sustainable development, a society reaches sustainability when it can provide appropriate conditions coherently. But the results indicated that although in social domains, effects were high, regarding health indicators and different environmental indicators, not only sustainability has not been created, they have also resulted in the unsustainability of the economic status of households. 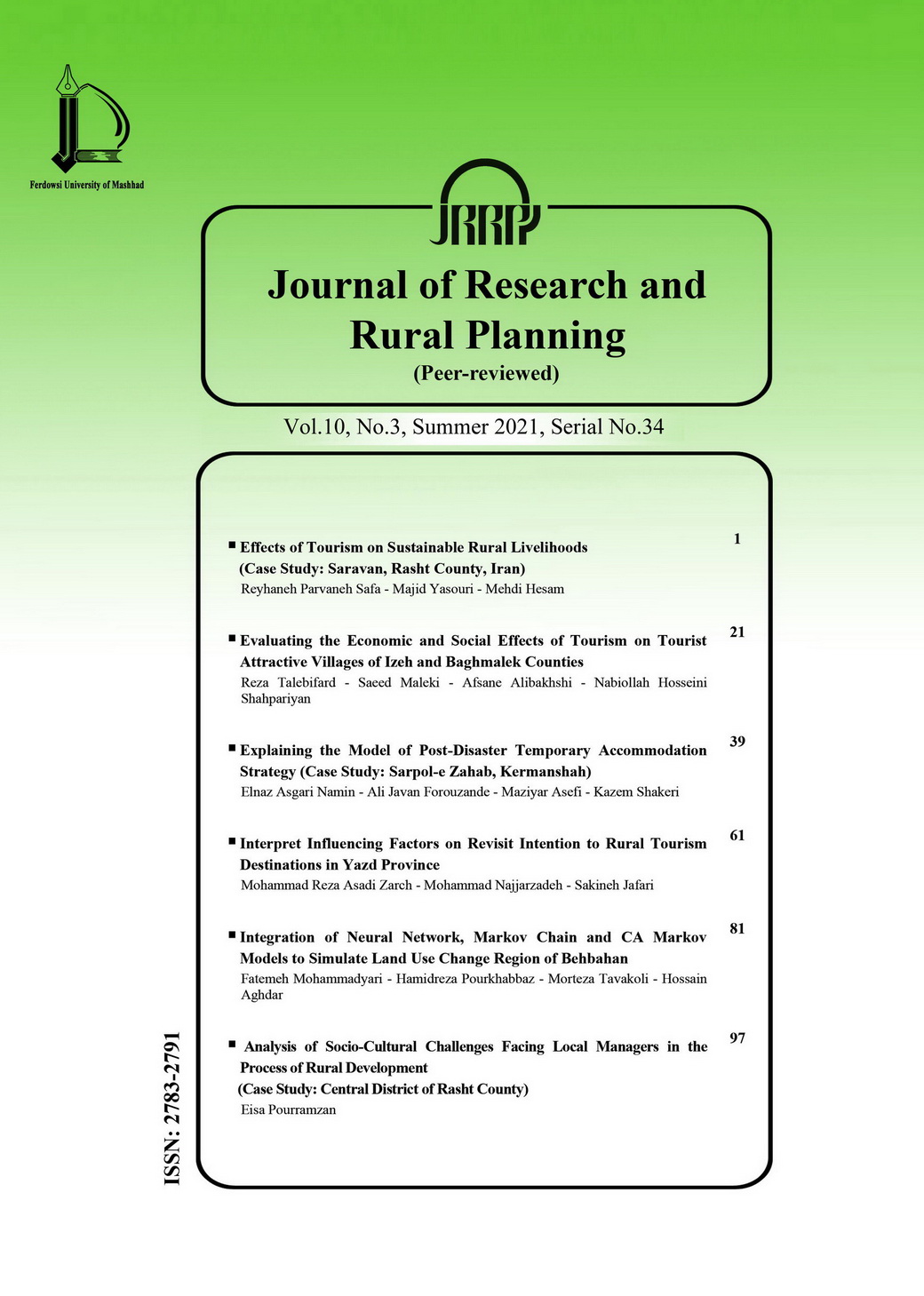